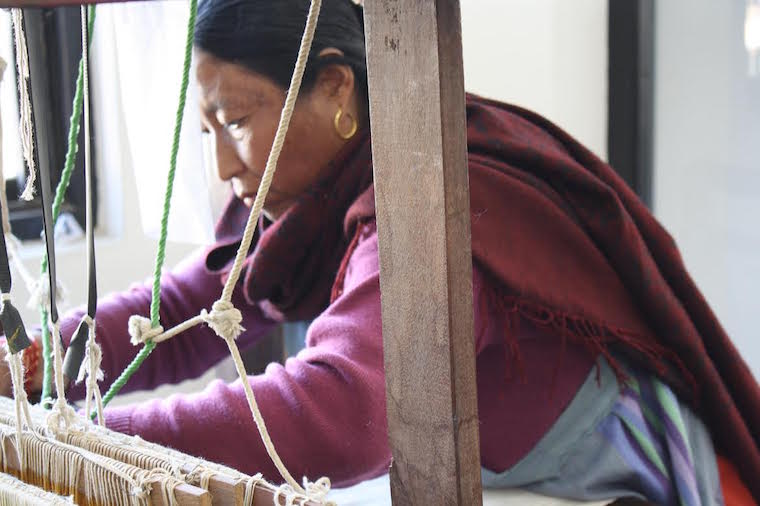 Ochre Yarn is raising funds to create on-the-job training opportunities for Nepalese women as the country continues to be among the worst affected by COVID -19. With up to 9,000 daily cases of the virus reported between mid-April to mid-May, Nepalese artisans are not only facing a health crisis but a severe loss of income.

Having worked and supported Nepalese families through a Fairtrade Organisation for a number of years, Sue Ingpen from Ochre Yarn is calling on assistance to help the struggling artisans get through the pandemic. As the owner of Ochre Yarn, Sue has ‘spent a lifetime’ manufacturing combinations of the finest natural fibres on offer including Australian Merino wool, Cashmere, Baby Bactrian Camel fleece from Mongolia and fine Yak wool from Tibet.

After sourcing the best fibres the yarn ends up in the hands of talented Nepalese craftspeople who create Ochre Yarn’s high-end luxury products. Sue Ingpen started working with the women in the Fairtrade Organisation in Nepal 10 years ago after visiting to complete some design work for the association, thus creating an invaluable partnership. Ochre Yarn donated an Ashford table loom to the organisation five years ago which quickly became a treasured item for the artisans.

Five years on Ochre Yarn is hoping to donate another couple of table looms at a crucial time for Nepalese employees.
“They have a lot of artisans training and only one table loom. They have asked if I could look at donating one or two more if possible and I thought I would try my best,” Sue said.
“It is vital, I cannot tell you how little they have, and they can’t get access to these things.”
“All of the material has to be supplied because there is just nothing there. They have to work with what they are given.”
The table looms come from Ashford in New Zealand and will need to be flown to Nepal when flights return, which is an expensive journey.

While employing mostly women, the Fairtrade organisation provides opportunities for those previously forced into sex work or those living on the streets, providing them with healthcare, childcare, wages and training.

Sue Ingpen said the situation in Nepal is going mostly unnoticed by fellow Australians with the extent of the crisis being revealed to her in a letter from Nepalese Fairtrade director Meera Bhattarai.
“If compared in population ratio, the numbers could be worse than in India,” she wrote.
“Within a month of the surge, hospitals cannot take an COVID patients due to lack of beds, oxygen, ventilators and other medical supplies …. People are dying just because of lack of oxygen supply.”
“With a collapsed health care system and inefficiency of the government to address the issue, the public have been left to fend for themselves.”
The organisation, which works with numerous global companies, suffered with rising cost of raw materials such as copper, cotton and wool but Ms Bhattari said they refrained from increasing prices.
“We had no cash reserves, but we managed to pay 50 per cent for the lockdown period,” she wrote.
“Unfortunately, there was neither support nor any stimulus package of any kind from the Government, even to micro or small scale or cottage enterprises.”
Meera talks about mental health and “how important it is for the artisans to have hope and know people care. It is about keeping their spirits and hopes up.”

Motivated by the state of despair of her co-workers, Sue from Ochre Yarn is looking to do what she can to help. “Because I’m a small business I don’t have a lot of funds, but they have my yarn there which is great because they have raw material to work with. I can send them orders and a small amount of money when I can to keep them going in the lock down.”

You can help Ochre Yarn to raise the funds needed to purchase and send two table looms to support the artisans in Nepal. Click below.